There is no way to disagree: the winter – with its chilly nights – can indeed be discouraging. What many want is to stay at home, under the duvet, watching a film and eating popcorn. I do not deny that I often end up including myself in this group. However, we must agree that Curitiba is not content with just  the title of the coldest capital in Brazil. At this time of year, the city takes it upon itself to become one of the most attractive winter destinations in the country. So much for the old mantra that there is not much to do here on the days when we would gladly smash the thermometers.

Let us start with the basics: take a look at the sunset. The season, despite being freezing, provides breathtaking sunsets. There are several nuances in the sky ranging from pink, passing through shades of violet to orange. In Curitiba, you can witness a beautiful sunset from Tanguá Park or the Botanical Gardens, two of the city’s main tourist attractions where admission is free!

It is true; there is no better time of the year to read a good book. But in the warmth of your winter coat you can peruse the major bookstores in Curitiba in search of your favourite literature, accompanied by a soothing hot drink. Many of the stores, such as FNAC (Parque Shopping Barigui), Saraiva (Shopping Crystal) offer an extensive variety of titles alongside their own coffee shops.

For those who like knickknacks and trinkets – well-accompanied by a delicious maize cake and mulled wine – there are the traditional winter fairs. These are street markets with dozens of stalls that offer anything from handicrafts to foodstuffs typical of the Brazilian winter, such as the pine nut, or “pinhão”. The markets go up until July 10th and are held simultaneously in Osorio Square (every day) and Santos Andrade Square (from Mon to Sat.).

If you are willing to invest in a memorable evening, there’s no better season than this to try a delicious fondue. The Swiss dish – usually served in réchauds is the epitome of winter. Whether the choice of fondue is for cheese, meat or chocolate, you can find it at the Petit Château, (in Santa Felicidade) and Château de Gazon (in Batel), two of Curitiba’s most traditional fondue restaurants. Swiss Röstis, or risottos, are also safe bets. They are welcome warming standards that can be found on the menus of many restaurants in town.

However, nothing says winter more than Curitiba’s endless parade of coffee houses or soup restaurants. To immerse yourself in culture, visit the coffee shop at the Oscar Niemeyer Museum or Café do Paço in the Palace of Liberty, both lined with contemporary works – alongside great artists. If you like the classics, go to Hoo Café. The gracious establishment offers a wide range of coffees, from the most elaborate to the most known, such as ristretto. Innovation is to be found at Terra Verde, the first organic coffee shop in Brazil, where your espresso or cappuccino is made with 100% organic beans.

If soup is your thing, you must visit the Acrótona, Manjhericão or Dona Ambrosina restaurants – addresses where the calories will be worth every penny. Inspired by the Soho neighbourhoods of London, New York and Buenos Aires, Batel SoHo is the part of the city that is most appropriate for Curitiba’s winter climate. Although it may be visited at any time of year, Batel SoHo is home to two or three blocks filled with a plethora of home furnishing stores, design shops, coffee shops, bars and galleries. Places that end up becoming charming and engaging shelters when the biting wind blows.

The centre point of the region’s attractions is Spain Square, which, especially on Saturdays, offers an extensive cultural programme, including an Antiques Market. If you have come to the conclusion that spending the winter in Curitiba will cause you to gain a few extra pounds, here is a tip: Wrap up well and enjoy an early-morning walk through the parks of Curitiba. Barigui Park, for example – with its huge lake – provides a beautiful spectacle throughout the day. However, it is early in the morning when the combination of the mist and the sunrise will leave something in your mind you just cannot buy in any currency: memories of an intense, and very successful, winter!

The “ecological” Curitiba  (by Sílvia Oliveira)

A train ride through the Serra do Mar (by Sílvia Oliveira)

The Ukrainian Memorial (by Sílvia Oliveira)

How do you get from Curitiba’s Airport to the city centre? (by Sílvia Oliveira)

Ilha do Mel: paradise is just down the road (by Sílvia Oliveira) 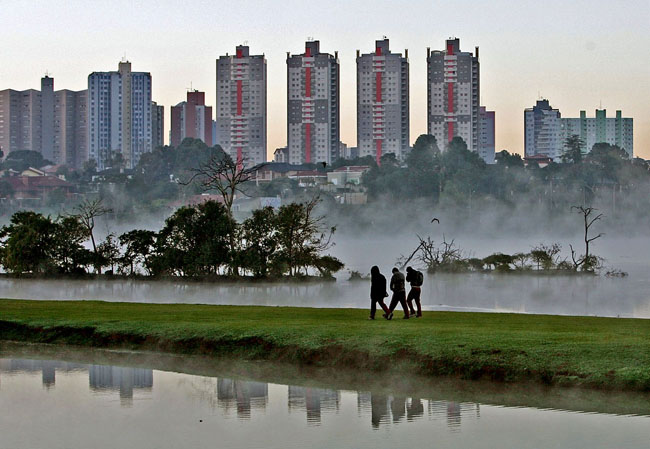 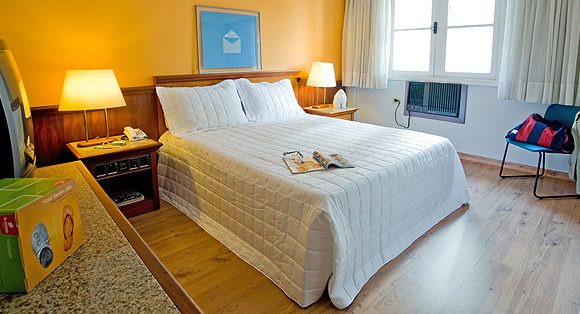